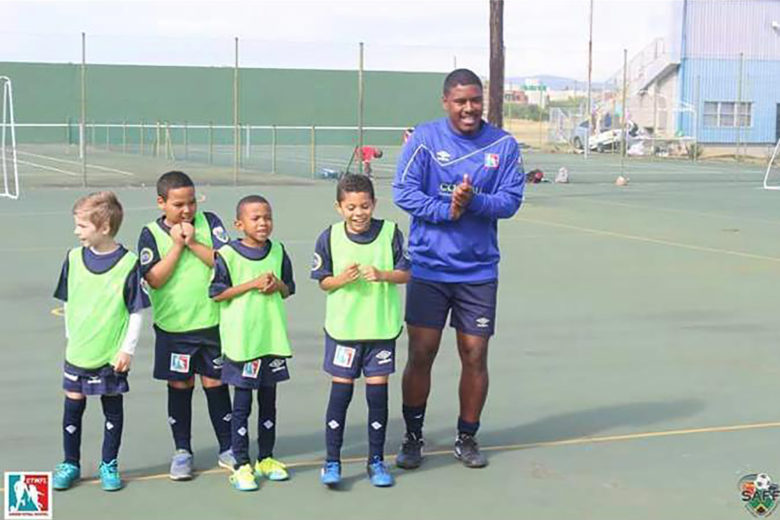 Oct 23, 2019
WorldcupComments Off on Boy from Valhalla Park on the Cape Flats en-route to Barcelona

Boy from Valhalla Park on the Cape Flats en-route to Barcelona as coach of the National under 13 Futsal team competing in Spain.

Meet Sherwin Souls, a highly talented individual with excellent technical ability both on and off the pitch. His panache for football and futsal, is improvised in his strong technique to solve problems in the game as it arises, which made him the perfect candidate as the head coach for the C13 AMF Boys World Cup to Barcelona.

Sherwins story is one of great inspiration. From the notorious gang ridden, poverty stricken and dangerous streets of Valhalla Park on the Cape Flats there was very little to offer Sherwin growing up except to be a statistic to the gangs.

As the youngest boy to a single mom of three children Sherwin was thrusted into adulthood before his time which often led him to being overwhelmed. Despite his hardship, he never compromised his value system in which, with his solid upbringing and stable foundation, Sherwin emerged tops and excelled remarkably in his sports especially football. He refused to be trapped in a cycle of deprivation. To remain off the streets and out of trouble he created a safety zone for himself through football from a very young age.

By projecting his skill on the field, he grabbed the attention of many a scout that led him to football clubs and soccer academies across the country as well as abroad. In 2010 he joined Cape United Soccer School of Excellence (CUSSE) and in the same year he won the Engen Knockout Champs with CUSSE, ‘an unforgettable feeling of being on top of the world’ he reminisces. The following year in 2011, the football academy renamed itself from CUSSE to ASD Cape Town, which was headed by former Zambia national team coach, Roland Paulse, then the position was occupied by former Bidvest Wits midfielder, Douglas Williams. The ASD Academy was owned by Englishman, Mike Steptoe and it replicated its success of which Sherwin was a part of and led the boys to win the Metropolitan Bayhill Premier Cup in 2011. Players in the team include the likes of Ayanda Patosi, Ebrahim Seedat, Ethan Sampson, Devon Saal and Sive Pekezele.

Winning the Engen U17 Knockout Challenge.

Sherwin maximised his opportunities within the football arena which saw him trial for clubs in Spain, Belgium, Portugal, Netherlands and Germany in 2013/2014. This experience in Europe then landed him a stint in Qatar in 2013.Upon his return to the mother city, he trialled with top flight football teams in the 2015 season such as the PSL Ajax Cape Town,Vasco da Gama and Cape Town All Stars which eventually saw him settling to play for SRB-ASD in SAFA second division for one season. His stints and master skills significantly took him off in 2015 to Canada to join the MLS side, Vancouver White Caps. Given insight into his mind and skill displayed Sherwin received recognition for his passionate effort which separated him from the masses.

His loyalty and ability to avoid negativity stood him in good stead as he progressed from football to futsal seamlessly. Sherwin continued to play top level football in Cape Town for Glendene United in SAFA second division and most recently for Kuilsriver Football Club in the SAB league as part of a community football and education initiative. His futsal career spans over 6 years which saw him play in the local community futsal league in Bellville where he honed his skill for the short-sided game and developed the passion for the sport.

Under 15 futsal team who won the league and are currently undefeated this year. This accolade naturally ensured Sherwin’s progress to currently coach the Fairmont Boys U19 First team. Again, his knowledge of the fast game delivered positive results for the Fairmont Boys who received joint top spot for the league but lost out in the semi-finals of the knockout stages.

His positive mark left on people and teams, advocated for his appointment. Over the course of the last couple of months Sherwin was identified as the optimal candidate for the position as head coach to lead the boys to Catalunya to the C13 AMF Boys World Cup in a few days.

His consideration for the job was based on his integrity, his trustworthiness and his consistent unselfish involvement with the AMF Futsal and the South African Futsal Federation. His relationship with prior futsal programs and aspiration to develop and connect with the community is what was very noticeable from the rest and it provided an implicit trust decision which set an outstanding example for the boys that he is tasked to lead.

In Spain, warming up to play Deportivo la Coruna

The South African Futsal Federation felt the need to steer our program and approach to futsal in a new and different direction as Sherwin will be included to an extensive AMF Futsal Development program in 2020.In lieu of this purpose, Sherwin will play a sustainable part in developing more AMF futsal coaches in South Africa .

The South African Futsal Federation sends best wishes to Sherwin and his team ahead of the World Cup and know we all are rooting for them back home. Safe travels boys!

« Support our under 13 Boys in Barcelona